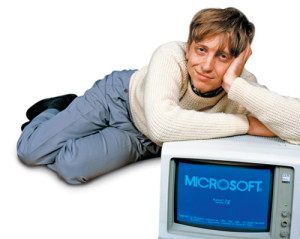 Bill Gates v. Gary Kildall
IBM suits visit Digital Research’s Gary Kildall, hoping to license his operating system for its newfangled personal computer. Legend has it that Kildall, a capricious, brilliant inventor, blew IBM off to take a flight on his private plane, and a young go-getter named Bill Gates swooped in to offer DOS. Kildall later insisted that he had a handshake deal with IBM, but in the tech industry, the affair is remembered (perhaps unfairly) as ‘the day Gary went flying’.

‘Greed Is Good’
Ivan Boesky, famed arbitrageur, gives a speech to UC Berkeley students saying: ‘I think greed is healthy. You can be greedy and still feel good about yourself’. He thus sums up the ’80s ethos and inspires Gordon Gekko’s ‘Greed is good’ speech in the Oliver Stone film Wall Street. Within months, Boesky is sent to prison and fined $100 million for insider trading.